Olanrewaju Abdul-Ganiu Fasasi, popularly known as Sound Sultan was born in Jos, Plateau state on November 27, 1976. He is a Nigerian music icon, rapper, singer, songwriter, actor, comedian, and recording artist, record producer, executive producer, basketball club co -owner. He is regarded as one of the pacesetters of modern hip hop music in Nigeria. He was notable for using his music to speak against poverty, corruption, bad governance and societal ills in Nigeria. The music icon took interest in music in 1991, miming at school parties and also writing his own lyrics. 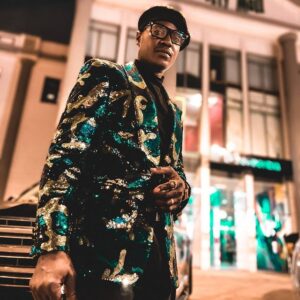 Sound Sultan’s career kicked off in show business when he hosted shows to raise money for his studio sessions. By 1999, he had won numerous local talent-hunt shows. In the year 2000, he released his first single, Jagbajantis; which was a hit in Nigeria. He was signed into Kennis Music after releasing many other singles and featuring in hit songs of other music artists. He released four studio albums under Kennis Music as at 2007, after which his contract with the label expired and he partnered with Baba Dee to start Naija Ninjas, a parent organization for a record label, production outfit and clothing line. After starting as a rapper, he has worked in different musical genres from R&B to Afrobeat, soul and Nigerian Fuji Music. 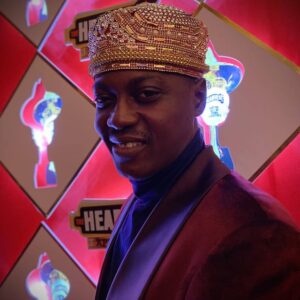 After the fallout of the African Basketball League, Sound Sultan joined forces with the organizers of the Continental Basketball League to become a team owner of Lagos City Stars (the 2017 champions) and a facilitator of the league entertainment. In 2012, it was announced that Sound Sultan was made a UN Ambassador for Peace for his exemplary lifestyle and career.

On May 12, 2021, It was reported in the Media that Sound Sultan was somewhere in America where he was receiving treatment in form of chemotherapy as the musician was diagnosed with throat cancer (Angioimmunoblastic T-cell Lymphoma). The couple has three children. He died July 11, 2021, at the age of 44 as a result of complications from the illness.

Sound Sultan took Nigerian music to a state of reawakening with the song Mathematics. Sound Sultan’s contribution to the Nigerian music is something that will forever be remembered. The year was 2000- a period when popular music was undergoing some major experiment in Nigeria. Music fans’ interest in juju and fuji genres had waned. Also, the proliferation of new private radio stations aided the airing of new sounds made from the elements of hip-hop, pop and indigenous music. Remedies, Paul I.K Dairo, Plantashun Boiz, JJC, Maintain, Wale Thompson, Styl-Plus, Ruggedman and later D’banj are among this generation of music stars who effectively achieved a sweeping cross-over appeal with their music. The playlists on radio, clubs and parties began to favour this kind of music above western songs.

Sound Sultan would also be remembered for his collaboration with Haitian rapper and producer, Wyclef Jean in the song, ‘Proud to be African’ featuring 2face Idibia and Faze from Wyclef’s Welcome to Haiti: Creole 101 album. They also collaborated on two other projects: King of My Country (2009) and People Bad (2012). His colleagues in the entertainment industry have expressed their grief at the news of his death. Afrobeat musician, Femi Kuti wrote, “I am shocked and very sad reading this news of the passing of Sound Sultan (He is family). I pray our Creator to give his family strength at this time. Rip Sound Sultan”

Former Vice President of Nigeria, Atiku Abubakar on his twitter handle expresses eulogies the deceased, on how he has been a role model in the world of entertainment: ” In the short time Olanrewaju Fasasi, fondly known as Sound Sultan, spent on this side of the divide, he was a role model to many in the world of entertainment. May the devout man of faith and family Rest in Peace. i pray Allah SWT comforts hid bereaved family and friends, Ameen” 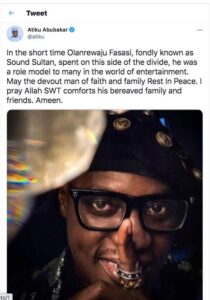 The Grammy Award winner, Burna Boy refers to him as a legend and strongly attests to him being an inspiration to many generations.

In a message by the Oyo State Governor, Seyi Makinde, Sound Sultan is noted for his “strong messages for the Nigerian society through various songs with thematic preoccupations that centre on politics, commitment and service to fatherland, among others.”

The Special Adviser to the President on Media and Publicity, Femi Adesina, also declared: “The President notes that Sound Sultan’s demise is not only a loss to the Nigerian music industry, but to the country as a whole.”

Members of the Nigerian Basketball Federation and the D’Tigers also expressed their grieve over his death, dedicating their victories against US, Argentina to late Sound Sultan 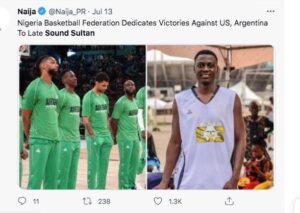 Like the legendary Afrobeat pioneer, Fela Anikulapo-Kuti, Sound Sultan’s music shoves at the conscience of a nation. 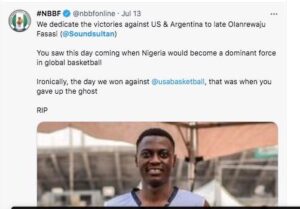 Augustine Miles Kelechi, professionally known by is stage name Tekno was born on the 17th of December 1990 in Bauchi State. He hails from Ivo Local Government Area of Ebonyi State. Tekno was born into the family of six children- five boys and a girl. He is raised in several part of the country including Nassarawa State, Kaduna State and Abuja. He is a Nigerian singer, songwriter and a keyboardist. Tekno […]