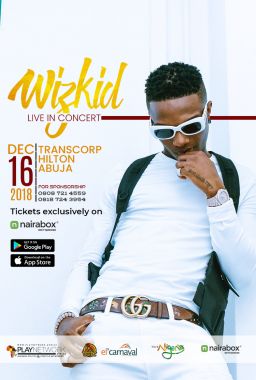 Ayodeji Ibrahim Balogun known professionally as Wizkid, is a Nigerian singer and songwriter. born 16 July 1990. He started recording music at age 11 and managed to release a collaborative album with the Glorious Five, a group he and a couple of his church friends formed.

were also released as singles from the Superstar album. Wizkid’s self-titled second studio album, Ayo, was released in September 2014 and was preceded by six singles: “Jaiye Jaiye”, “On Top Your Matter”, “One Question”, “Joy”, “Bombay” and “Show You the Money”.

Wizkid would be live in abuja on the 16th of December, 2018, at Transcorp Hilton, Abuja, Its going to be a night to remember, get ready to experience performances like never before.